Need Some Help? We Can Help

So what exactly is Medicare Plan K?  Plan K is one of the current standardized Medicare Supplement plans that may be available in your state.  Why do we say ‘may be available’?  Most carriers previously chose not to include this plan in their Medicare Supplement offerings in the past since it was not widely sold nor understood by most consumers and even many agents.  This trend is slowly starting to change simply because more Medicare beneficiaries are looking for lowering cost alternatives to higher costing Medigap plans, but still do not want to enroll in a Medicare Advantage plan due to network restrictions. 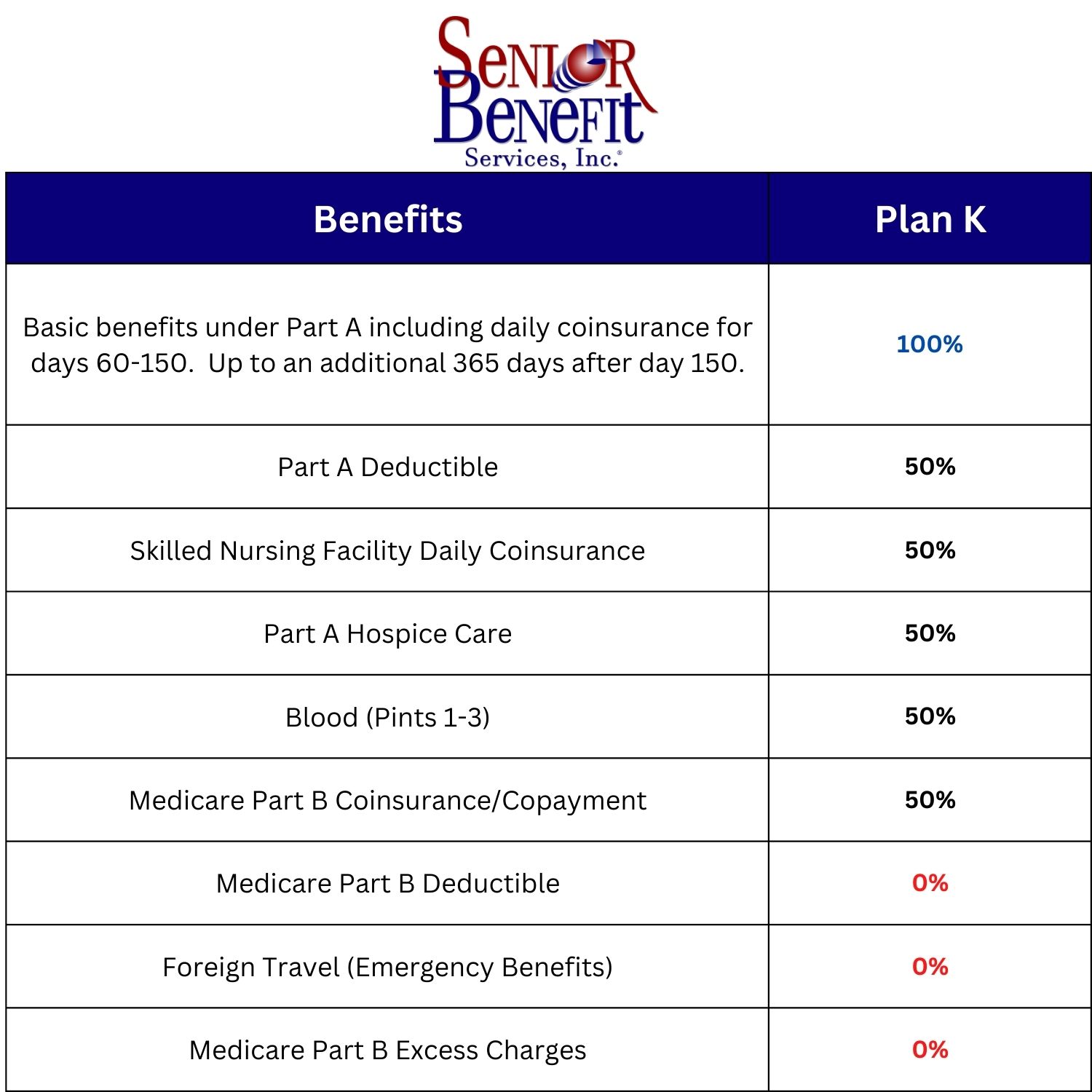 Plan K offers many of the same benefits as other Medicare Supplement plans, but as the consumer you are taking on a ‘cost sharing approach’ instead of having most medical care covered at 100% between the Medigap plan and Original Medicare.  So how does the cost sharing actually work?  As an example let’s take the Medicare Part A deductible which is $1,600 in 2023.

Under Medicare Plan K the Part A deductible will be covered at 50% rather than 100% like you would find under the popular Medigap Plan N and Plan G.  This means that in 2023 if you were to be admitted into the hospital you would be covering $800 of the Part A deductible while your insurance carrier would be covering the other $800.  Unfortunately under Plan K the insured is responsible for the Part B annual deductible, any Medicare Part B excess charges, and any emergency medical charges outside of the United States.

The good news is that this plan does provide the insured with a annual maximum out of pocket limit of $6,940 for 2023.  While many would be taken back by this amount, you might not be aware that most Medicare Advantage plans for 2023 have a out of pocket maximum of $7,500 (and that is even using in-network doctors).  If a policyholder were to reach that out of pocket maximum then the Medicare Supplement Plan K would pick up 100% of the charges of areas originally covered by this plan’s benefits.

Pricing: Is it Worth It? 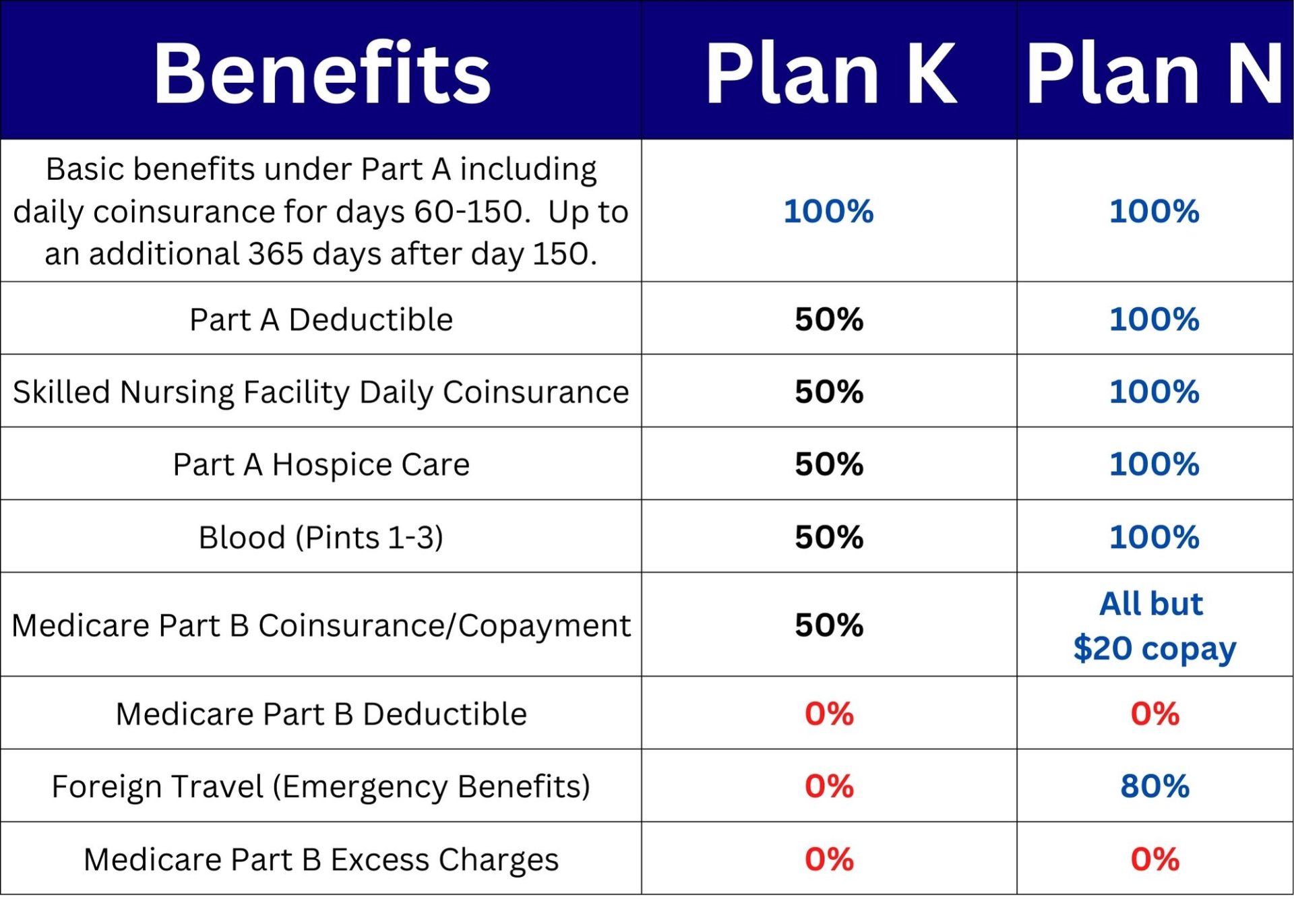 If we look at comparing the premiums for a 65 year old female (non-tobacco user) in the state of Maryland for a Plan K vs Plan N then here is how it breaks down.

On monthly premium alone the clear winner is Plan K with an annual savings of $363.12.  So if the policyholder does not have any claims for the year then they would have saved over $300 by going with the Plan K.  As we all know, the older we get, the more likely we are to experience health conditions that would require us to see a medical professional.

What if this individual ended up having to be admitted into the hospital for a fall they took and broke their hip?

In certain states and at certain ages, the Medicare Supplement Plan K could very well be a solid alternative to a Plan N.  At Senior Benefit Services we can compare rates across all our carriers and find the plan that will work best for you and your budget.  Call us today at (800)924-4727 to get your FREE…No Obligation quote comparison.

Medicare is confusing, but our goal is to Make Medicare Easy. We help you find the right Medicare Plan. We Do FREE Quote Comparisons of up to 25 Companies.Compare Plans

Speak to an Agent

Our advisors will provide you with a complete comparison of the top priced plans in your area.

We do not offer every plan available in your area. Any information we provide is limited to those plans we do offer in your area. Please contact Medicare.gov or ‍1-800-MEDICARE to get information on all of your options.